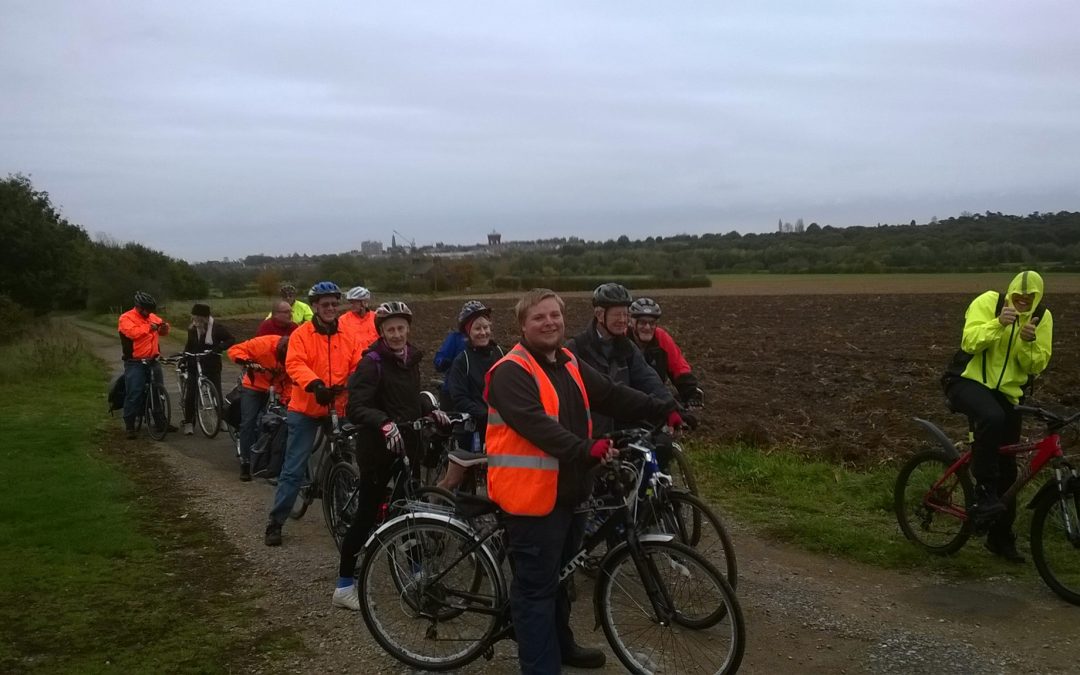 PN: Do you remember that first bike ride?

AP: Yes, it was in 2011, and it took me two hours to cycle on my own to Wivenhoe. I’d heard about the CTC Cycle Champions and I contacted Malcolm Mitchell, one of the volunteer ride leaders. I’d had a bike for six years and never used it, I was 24 stone, and needed to lose some weight. So I emailed Malcolm via YouTube and with his encouragement I then did my own ride from Greenstead to Wivenhoe and back. It was really painful, I was so sore and tired. My next ride was with Richard Monk’s Saturday group to Layer via Oliver’s Orchard. It was a tough ride, there were 10-15 of us, a mixed group with me the youngest and some of them in their 70s. It took a while – but I wasn’t the last one up the hill!

PN: When did you become a volunteer for CTC Cycle Champions?

AP: My first ride was in July and at the end of the summer Richard asked me if I’d be interested in volunteering. To start with I helped him with Dr Bike at the Cycle Champions market stall, and I did some training about riding with a group. The following summer I led my first ride, with Richard as back marker, and then started leading regular weekly rides. We also organised a couple of trips to London, riding along the canal from Stratford to Camden, and one to Norwich along the old railway line from Norwich to Aylsham. It’s 25 miles long and when it was built, it had the tightest curve in Britain.

PN: Tell me more about the people who came on these rides.

AP: They were referred through Leisure World’s Life Enhancing Activity Programme (LEAP), as they need to be more active or to socialise more. They paid £2 a ride, and there was a slow paced one on a Wednesday, and a faster, longer one on a Friday. Some stayed on to become volunteer leaders themselves, like Mike White who started 6 months after me. He went to live in Florida in 2016, and the other Monday riders have carried on, sharing the lead role between them.

AP: No, the aim was to set up groups in several Essex towns. CTC paid the ride leaders to start with, to get groups up and running, and then some of the riders were trained as volunteer leaders. Mike and I used to do Tuesday nights and Wednesdays. One Christmas we led a ride that ended up in Messing, which was 10 miles each way, instead of the usual 4 miles, so that was a running joke for months afterwards. We never knew who’d turn up, so we had to cater for all levels. The faster people set off first, and the slower group would meet them at the destination. People struggled with the distances to start with, but as the rides progressed, they found it easier, and weren’t so out of breath.

PN: What was your most memorable experience with Cycle Champions?

AP: I remember we helped a group of 40 Dutch cyclists on tandems, half of them visually impaired, who were riding from Amsterdam to London and needed some help getting through Colchester. We plotted a route for them, and I cycled to Harwich to meet them at their hotel. They had five or six cycle outriders, one motorbike outrider and an ambulance, so that was definitely the most memorable.

PN: And next you got a job with a bike shop?

AP: I didn’t know anything about bike mechanics, but after the CTC funding finished I was looking for work, and Richard told me that Andy Woolf was opening a new bike shop on Wyncolls Road. I started off taking phone calls, and booking bikes in for service, and then Andy taught me how to strip bikes down and service them. I knew how to do some of the basics, as I used to take toys apart when I was a kid, and then put them back together again. I really liked learning by watching Andy, rather than being told what to do.

PN: What do you enjoy most about cycling?

AP: I like to be out travelling, having new experiences, and I like social rides. George and I rode from Colchester to Cambridge once, it took us five and a half hours. And when we were within 10 or 15 miles from Cambridge, there were suddenly loads of cycle paths, and we wondered what country we were in! My longest ride was to Lackford Lakes, it’s a Suffolk Wildlife Trust reserve, 5 miles northwest of Bury St Edmunds. We rode back via Boxted and East Bergholt, and rode from Higham along Church Lane into Boxted – and then I crashed! I hadn’t eaten enough, so I had a sandwich and just sat there for five minutes.

PN: So what was your next new job?

AP: Andy saw an ad for Bikeability instructors at his son’s school and suggested I apply. I’d already done a Bikeability course with Cycle Training East, so I signed up for the instructor course in October 2017, and started work in November. They’re all school groups, mostly in Colchester and Tendring. We had a useful workshop with some instructors from a teaching background, learning how to criticise bad behaviour not the child. When people say they’re struggling, we know how to guide them, and we say if you need to get off and walk, that’s fine. Bikeability is for all ages, from school children to older people. It’s great for building confidence, and we also offer one to one sessions to help people plan routes from A to B.

PN: What’s the best and worst thing about cycling in Colchester?

AP: The best thing is the huge number and variety of routes, there are many more than you think. And the worst has to be the traffic in the town centre, which is why I say that the bike is best for short trips.

Bikeability training is offered free to Essex schools, and adults can pay to go on a course or have a one-to-one confidence session for just £10.

The UK's largest inter-school walking, cycling & scooting competition, The Big Pedal, is now open for registrations - let's make it the best year yet in the East of England.