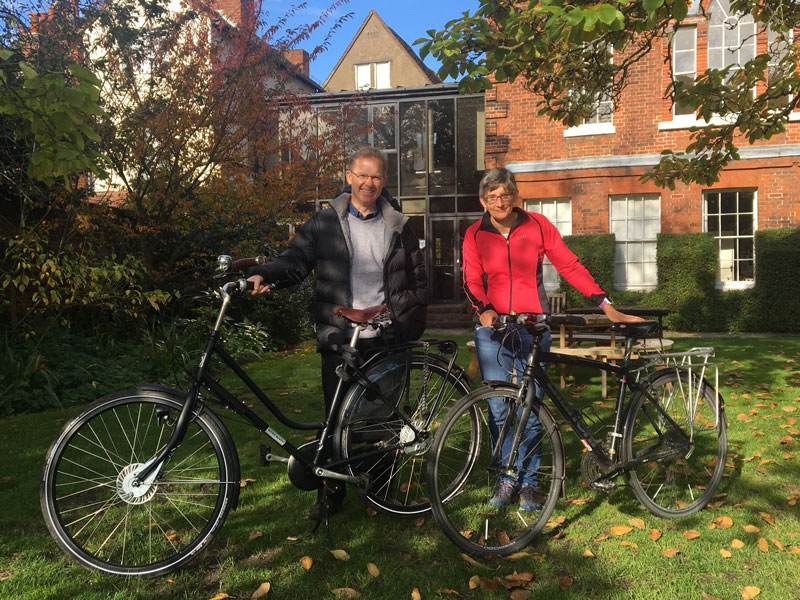 This month I met Catherine and Stuart Johnson for a cup of tea and a catch up at The Minories tearoom. We talked about cycle campaigning, utility cycling and how riding a bike quite simply puts a smile on your face!

How did you first start cycling?

Stuart: I’ve always cycled really. When I moved to my secondary school in Norwich it was the easiest way to cover the three miles to school and meant no waiting for the bus.

Catherine: We began cycling as a couple about 30 years ago. Stuart persuaded me to go on a cycle touring expedition on the Isle of Man so I bought a touring bike and off we went! It was absolutely fantastic, I loved it.

Stuart: After that we got into mountain biking, especially this thing called Trail Quest – sort of like mountain bike orienteering. You’d have a list of map locations to navigate to in a given time, with each one being worth a certain amount of points. You’d have to collect as many checkpoints as possible before the time ran out, and if you weren’t back then points were deducted the later you got back.

Catherine: Stuart was very competitive! But after that we sort of just kept on cycling.

Catherine: I grew up on a farm and we had a collection of bikes hanging around. There were three of us growing up and we’d go tearing across fields and over obstacles and then the farmhand would fix the bikes when we broke them! The farm was quite close to a busy A road so we couldn’t really cycle on the road, but my mum was very into cycling when she was younger – she even had a tandem and would go out on that.

Stuart: I had a Gresham Flyer I still remember riding it when we first moved to Norwich from the very flat Norfolk coast and I found my first hill. Going up wasn’t a problem but coming back down I’d never experienced anything like it before and didn’t know how to use my brakes… next thing I knew I’d gone headlong over a wall!

What kind of riding do you do now?

Catherine: Since having children and moving to Colchester we’ve done a lot less mountain biking, and for a long time I was really only riding for sport. I got really into duathlons, then triathlons, and more recently sportives like RideLondon. I never really considered cycling as a way to get around until about 18 months ago when I started riding to work. I’ve sort of become a bit of a campaigner at work and got bike racks installed so I didn’t have to keep my bike under the stairs anymore! It wasn’t easy to begin with but now it’s just a bit more normal.

Stuart: When I worked in Witham I used to ride the 18 miles each way two or three times a week, but since I left that job I’ve enjoyed everyday utility cycling a lot more. I ride around Colchester for just about anything (in my regular clothes!) and take it easy. There’s no need to arrive all sweaty – just go a bit slower!

Catherine: We also enjoy rides out into the countryside on the weekend. We’re so lucky to live so close to Suffolk and the quiet lanes and beautiful scenery – just a couple of hours is enough to get that feeling of peace and quiet.

Stuart: At the end of the day it’s about having fun. It’s not about what you’re wearing or riding, just ride.

Stuart, How did you get involved in cycle campaigning?

Stuart: We’re both passionate supporters of cycle campaigning and improving infrastructure and the environment so more people can ride and I’m active in Colchester Cycling Campaign [Stuart’s work brought forward the Colchester Cycling Charter]. I first got involved a few years ago when the council were proposing the Lexden Road bus lane works. I couldn’t believe they were planning on moving bicycles onto a shared pavement with thousands of children already walking there – and I let Essex County Council know! I even got called a “cycling fanatic” by the highways boss at the time! That whole project was the thing that spurred me into action. I’d been left infuriated by the Mile End Road cycle pavement fiasco but I felt like I couldn’t just sit by after Lexden Rd. I turned up at the next CCC Bike Drinks meeting (New Inn, 3rd Monday each month, 8pm) and I’ve been involved ever since.

Catherine: Some people think we’re mad to cycle on the road, but it’s normal now. It feels like people are fed this anger against cyclists through newspapers and the internet, and it’s not really their fault. Why get angry? We’re all sharing the world.

Stuart: I saw this James May video where someone asked what he does if he meets people riding two abreast and he just said “Why worry about cyclists, wait until it’s clear and give them a wide berth. Please let’s not have any of this road sectarianism”. I like that attitude and try and keep a positive approach to campaigning.

Catherine: Mixed! My route to work is pretty good, but I go through Castle Park and Highwoods so it’s mostly off-road. There’s some really good stretches, but there’s some absolutely awful bits too like Lexden Rd where you’re fighting for space and being forced into the gutter on a really poor road surface. The other problem is that infrastructure doesn’t join up – until people can get all the way to their destination then they won’t feel confident to cycle. It is getting a little bit better as more people are on bikes and drivers are getting used to it, but there’s a long way to go.

Stuart: There’s a problem with drivers being distracted too. You can be turning right across traffic and never know if it’s safe because someone could be looking at their phone at the wrong moment or fiddling with the radio. I actually started running a rear facing camera when I was cycling to work in Witham to film close passes and pushed Essex Police to start reviewing camera footage. They’ve actually done some really good work on that but there’s not enough publicity around it so not enough people know about it.

Catherine: A big problem at the moment is bike theft. There’s been so many bikes stolen recently, and it’s either targeted to people’s homes where they know there’s expensive bikes and they come with the right tools or it’s chancers who can cut through locks in public places. People really need to start using gold rated locks (Sold Secure ratings) to deter those chancers so the Police can focus on real crime and tackle the organised bike thieves.

And finally, what’s the best thing about cycling?

Stuart: It makes you happy! My mood lifts as soon as I’m riding, and it puts a smile on my face.

Catherine: I actually look forward to the cycle home, it’s a chance to decompress after a day at work and I come home with a much clearer head.

Stuart: Even a bad day at work feels ok, I used to think of it as a 3-hour ride interrupted by 8 hours of meetings! I used to like riding in winter too, in the dark in the lanes you get a fantastic view of the stars.

Catherine: Even our daughter has started riding for utility now. We bought her a bike from Re~cycle in Wormingford when she went to university and it’s changed her 30-minute walk into a 10-minute cycle and she’s able to go shopping with panniers too. I think she’d begrudgingly even starting to enjoy it…

Thanks to Catherine and Stuart for taking the time to chat today. Don’t forget to add your name to the Colchester Cycling Charter if you haven’t already!

Help put your health & wellbeing at the heart of transport planning in #Colchester: Future Transport Strategy creates opportunities for more walking/cycling reducing congestion & improving air quality in the town. Have your say at https://bit.ly/2UKjqMk
@yourcolchester

Cycling for good - what do you think of http://bigissue.bike?
Want to see this in Colchester? Fill in the form on their website