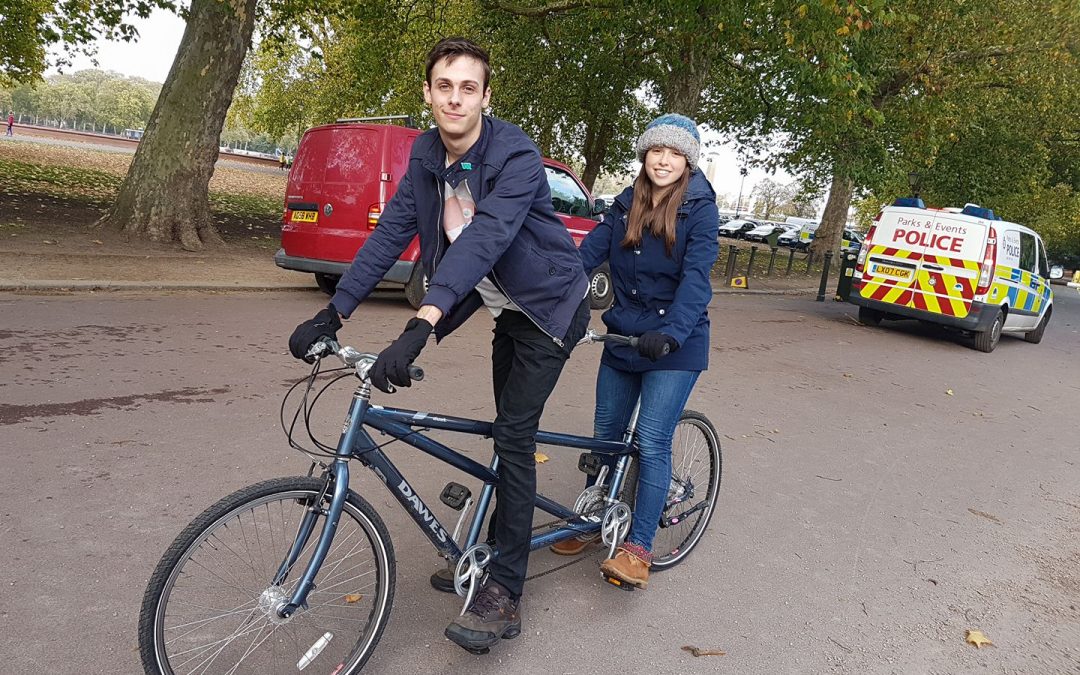 Daniel Colaianni now runs a creative marketing agency but when he was just 12, he and his mum were one of the four families chosen to be Cycle Colchester Cycle Stars. (Photo here)

PN: How did you get involved with Cycle Stars?

DC: My mum and I had recently moved to Colchester, and I was looking at different things to do around here. I was intrigued by the idea of us some getting free cycle gear so we applied. As it was a competition, I didn’t take it too seriously, but when we got confirmation that we’d been chosen, I was very happy and excited.

PN: What help did you get?

DC: Everyone had free Bikeability cycle training, and it was really good fun to be part of that with the other families. Neither of us was very confident on the road, but the instructor was really good and our confidence soon grew. And we were given vouchers to use with local cycle stores, so we got new bikes from Re-Cycle and bought some new cycling gear and some racing stuff.

PN: Had you done much cycling before?

DC: We’d come from London where it was easy to get public transport. Colchester came as a bit of a shock to me, as I was used to being independent, getting the tube and bus everywhere. I decided that cycling would be the easiest mode for Colchester, so I got a mountain bike, which was pretty cool at the time. I did a lot of cycling with friends from secondary school, mostly on pavements and cycle paths, although there weren’t as many of them as there are now. We lived in New Town and there was a path opposite the rec that went into a lovely wooded area where we used to ride.

PN: Tell me about the bikes you’ve had since then.

DC: Every bike I’ve bought has been from Re-Cycle! My first one got broken and we took it to one of the Dr Bikes, who said the wheel was buckled and the frame bent, so it wasn’t worth repairing. My next one was stolen from outside the house and I was really upset about it. My mum put up a sign saying the person who did it should be ashamed of themselves, and I couldn’t believe it when someone brought another one round and gave it to me. At the moment I’m planning to get a road bike or a hybrid from Re-Cycle. I really like trails but most of my cycling these days is on roads. And I haven’t cycled for a while as I’m too fond of the warm weather.

PN: Would you say you’re still a regular cyclist?

DC: I used to cycle a lot more when I was at school. It was a couple of miles each way and quite a difficult ride, with a very steep path. At first I rode half way and then walked the rest, but I got used to it after the first month or two. I also had a Saturday job with a digital marketing company and once I left a camera at home so the bike came in handy to cycle back home to get it. Later we moved house and it was just a minute’s walk from school, but I still used to cycle to work on Saturdays. And now I’m working, cycling is more of a leisure thing for me. When I first set up my business, I needed to be able to drive to get to client meetings. I’ve had my car for a year now and have done around 12,000 miles. And when I took my test, I found that the Bikeability training was a real advantage, having good road sense meant I felt pretty confident and I passed first time.

I went to a conference in San Francisco last year and stayed on for another couple of days and hired a bike. I rode to the Golden Gate Bridge, and it was seriously hilly to get there: not just hills, virtually like climbing a building! I was speaking to a driver there and he said that no-one drives a manual car as they’d just stall all the time. And there were some people who were doing competitive rides, actually choosing to go over to the other side of the mountains!

PN: What sort of rides do you prefer?

DC: I like cycling fast, and I like the hills in the countryside out towards Ardleigh and beyond. I probably prefer riding on my own, so I can choose whatever speed I want. When I ride with friends, we link phones, with just one earpiece in, and we can chat as we ride. A walkie-talkie would probably be better, but this is our rudimentary workaround.

PN: We’ve been talking mostly about cycling since you came to Colchester, but what was your first experience of cycling?

DC: When I first tried to learn, as a child, my parents showed me what to do, but I just couldn’t do it without stabilisers. But Mum and I used to go to Battersea Park and hire banana bikes which were recumbents with three wheels. Then one day, when I was about 9, I just said to Mum “I want to ride a real bike” so we hired a couple of bikes and it was as simple as that – I just started cycling. And it’s funny, now I’m about to teach someone else, a 23 year old friend who’s never learned to cycle. I’m planning a visit and have promised “I’ll teach you to ride a bike”.

Fortunately, Colchester children don’t have to wait till they’re in their twenties for someone to teach them how to cycle! Bikeability training is delivered in many local schools (see picture of our cyclist of the month from October 2016 James Alden) and there will be a number of summer holiday courses at Queen Boudica Primary School in Mile End. See the main newsletter for details.