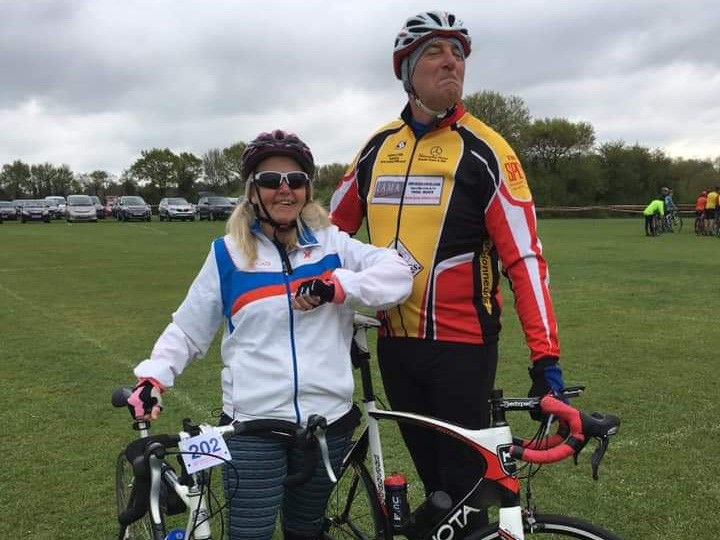 This month I’m joined by John McArthur, a full-time cycle commuter and Colchester Bike Kitchen volunteer. We chatted about his 7(!) bikes, his time as a bike shop owner and how we should all ride our bikes a bit more!

Tell me a bit about how you first started cycling

I cycled a bit as a child, but not seriously at all. It wasn’t until I was in my 30s and living in East Kilbride that I started cycling properly. It was built as a new town and had a great cycle network so it was much quicker to get around by bicycle than in a car. For example, getting to work would take 2 minutes to cycle or 20 minutes in the car – it just made sense!

My first bike was a pink road bike I bought from a friend’s shop (he did me a great deal!), I leant it to my brother-in-law though, he broke it and I never got it back. I’ve got 7 bikes now though, including a penny farthing.

Everything! Although I like road cycling best, I try to incorporate cycling into everything. I have a commuter which I cycle on pretty much every day, and a mountain bike that I love to take for a cheeky little hour’s ride into the woods when I get the chance after work. I’m not fussy about what I’m riding though, I just like a reason to be out and keep fit. I’m equally happy in my shed tinkering with my bikes, and I’m a big believer in preventing mechanicals and punctures by looking after bikes rather than fixing them by the side of the road!

You volunteer at Colchester Bike Kitchen too?

Yes, I found out about the Bike Kitchen through Pam at the Green Party and started helping out in February this year. I think the Bike Kitchen is a great idea, it’s an important resource to educate people about the importance of looking after their bikes. We’re very fortunate to have such a well-stocked workshop thanks to Stuart (CBK founder, who passed away last year). I brought my friend Jenny along to the Bike Kitchen a couple of weeks ago and she came away with a new-found confidence of how to do basic repairs. I especially love seeing kids getting enthusiastic and learning all of this early on. I’m just keen to get folk on bikes!

You owned a cycle shop for a while, how was that?

I started my shop, Centrebike, in September 2007 after spending time working in France for a cycle hire company. The whole time I way away I knew I was going to start a shop when I got back. We sold what I like to call “normal people bikes” not high end stuff, but the kind of thing you are happy commuting to work on or cycling to the shops. We also did repairs, again with a focus on “normal” bikes. It’s important to me that people understand a bike isn’t just a bike, and you have to take care of them. The difference between a £100 bike and a £250 bike can be the difference between something you enjoy using, and something you quickly resent, put in the shed and forget about.

We had a good couple of years, but were hit hard by the recession in 2008. I had a very loyal customer base who were sad and angry when I had to close, but despite offers of additional funding from friends I decided to call it a day and moved down south shortly after in search of the sun.

On the whole I find it a more positive than negative place to cycle. We’ve got an acceptable cycle network, it’s got its faults, but on the whole it’s good. The problem is people not using it! For example, the NCN 1 (Sustrans National Cycle route) runs parallel to Lexden Rd behind the schools and it’s a really good path. It’s largely off road, quiet, and well signposted so you can get from Stanway into town without getting stuck in traffic. I use it to cycle from my home in Stanway to my work at the Hythe, and if I ever have to drive to work I’m quickly reminded how lucky we are to have such a good cycle network. There’s lots of paths like that around and if more people were aware of them and chose to cycle then we’d quickly solve the traffic problem!

I do see it partially as a national issue in England though, especially in the countryside. If people use paths considerately then there’s no reason why walkers, bicyclists and horse riders can’t rub along using the same paths. It’s an attitude thing, we need to learn to get along.

The best thing is I’m not driving! I own a car and drive a lorry for a living, and I hate driving. When I’m cycling I don’t have to worry about anything else (especially my phone!), and it’s a quick way to get around. When I can get somewhere quickly and easily by bike, what’s the point in driving?

I also really enjoy cycling events and the friendly social side of things. I do the Essex Air Ambulance Ride, the St Helena Hospice Ride and I recently completed the Boxford Tornado ride with my friend Jenny. Most events are extremely social and you meet lots of people who all have a shared interest.

To be honest, I just prefer the bike.

Thanks for joining me for a cuppa John, I’ll see you at the bike kitchen soon!