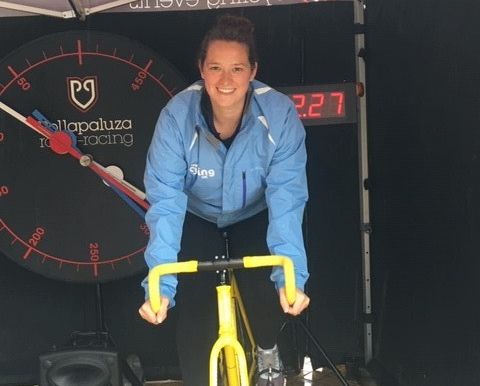 This month I chatted with Tori Cook, Cycling UK’s new Development Officer for Essex. Tori is Colchester born and bred, and is getting back into cycling after a break. She told me about how much of a help she’s found cycle confidence training, riding from London to Paris and how cycling keeps you healthy – physically and mentally.

How did you first start cycling?
I started when I was about 5, riding with my family around the country lanes and the back roads, but I then didn’t cycle again until quite recently. In my previous job at a charity they asked if I’d like to ride London – Paris, and so I started training for that! I’d been wanting to do a challenge for a while, like a marathon or something, so this was just right. I loved the ride itself and the camaraderie of all of us making the trip together. Riding in France was a revelation too; the roads were great, and the drivers were so considerate, although not so much in Paris but that’s cities I suppose. I did have a couple of accidents en route that shook me up a bit though, and it put me off cycling for a while.

When I started my current job with Cycling UK they offered me cycle confidence training and that’s been a huge help. Learning how to take the lane, and how to make cycling less stressful has made it much more appealing. The other side is I find I am now a lot more understanding of cyclists when I’m driving too as I understand why people do things, and also what you shouldn’t do on a bike! Getting back on a bike has been great for my mental health, it’s a great way to de stress after work on a gentle off road route like Abbey Fields.

Do you remember your first bike?
When I was a little kid I had your usual bike with stabilisers. I really lucked out when I did London-Paris though, I was leant a Pinarello road bike! I had no idea what that meant at the time but it was fantastic to ride, and made the trip really easy. I now have a Carrera hybrid for getting around town and it’s perfect for the job. It’s big and stable and can go off road too, but isn’t too heavy.

What kind of cycling do you do?
As part of my job as Cycling UK’s Development Officer for Essex, I try to cycle to meetings as much as possible (although that can be difficult as I cover such a big area). I did get to try out a cargo bike through work though, and they’re not as easy to ride as you might think! It was so nice to see the response from other people too, they can’t get cross at a bike being on the road when there’s two smiling kids waving at them.

I really like just cycling for leisure in my spare time, especially with my partner. We cycle around the cycle paths near where we live as a way to relax.

How do you find Colchester as a place to cycle?
In a word, frustrating. Key links just stop and people just aren’t used to bicycles being on cycle paths. I ride to relax and as a town it isn’t the most stress free place to cycle around. Once you have found the cycle paths there are some great short cuts and views but sometimes they can be difficult to find.

What’s the best thing about cycling?
This is going to sound like a cliché, but it’s the freedom to go anywhere and feeling the wind in your hair. It’s so much easier than walking too, and you can’t get that feeling anywhere else.

Thank you to Tori for taking the time to sit down for a chat, and make sure you say hi if you see her out and about at cycling events in Colchester